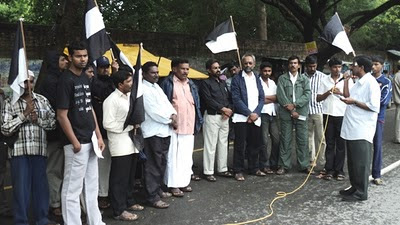 December 6th: The Puducherry District unit of TMMK organised a Demonstration at 10 am,opposite to Swedesi Mill, demanding to take action against the persons responsible for the demolition of Babri Masjid.

The demands raised in the demonstration are:

1. The Supreme Court should deliver its judgment in the appeal petition filed challenging the Allahabad High Court verdict on Babri Masjid land case without any delay.

2. The Government should take steps to speedup the Babri Masjid demolition case pending before the Raebareli Court at U.P.

3. The Central Government should take action against the 68 persons, who were accused for demolition of Babri Masjid in the Justice Liberhan Commission report.