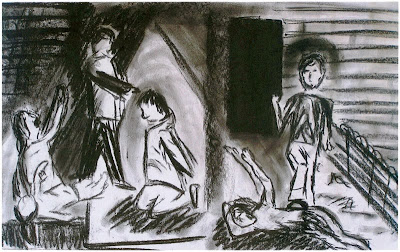 We are living in a period in which the hard earned civil and political rights are under severe threat from the state. The neo-liberal politics unleashed by the state deprives large number of people their basic livelihood especially in areas that are rich in mineral and water resources. The new laws enacted by the state serve the carporates as instruments of appropriation of common properties that belongs to the adivasis and peasants. When the victims of such dispossession and the movements that represent them fight for their rights they are brutally repressed. The state never hesitates to wage a war against its own citizens. Paramilitary forces trained in violent repressions are deployed in such areas and violence let loose on innocent people. Apart from such paramilitary forces, armed goons paid from state exchequer are also brought into service against the poor tribals and peasants. They move with arms and indulge in all sorts of heartless and brutal activities against their own people. In this way the local people are divided into two factions and made to stand against each other. Hundreds of villages are forcefully emptied and lacks of adivasis are made internally displaced. Fake encounters, unlawful arrests, sexual violations and forceful disappearances have become day to day affairs in such areas of conflict.

Even in states where there are no such conflicts, restrictions are imposed on the rights to speak and assemble. Permissions are denied for peaceful meetings and demonstrations. Even hall meetings for which no police permission is required, are obstructed by threatening the hall owners. Black laws with extraordinary provisions to curtail the fundamental rights enshrined in the constitution are enacted by the central and state governments. The draconian provisions of the infamous POTA are now incorporated into the ULAPA which is a permanent act in the sense that it requires no parliamentary approval for every two or three years. These illegal and abnormal provisions incorporated into the preventive detention and anti terrorist laws and the procedural lapses by the executive are often legalized and made normal by the judiciary.

In these circumstances the importance of civil rights movements has increased. They have to move the courts, come to the streets and fight for constitutional governance. In such a situation the civil rights activists functioning in the conflict zones have to bear the brunt of the oppressive instruments of the state. Draconian provisions of preventive detention laws are deployed against them and they are accused and arrested for ‘abetting’ the terrorists and extremists. The police and the illegal brigades nurtured by them do not even hesitate to eliminate such activists. There are innumerable examples of attacks and killings of HR activists in India. Even the United Nations human rights rap-por-teur Hina Jilani had registered that the attacks against the HR activists are increasing in the conflict zones which are rich in mineral wealth.

In the past civil rights organizations have played a significant role against the violations of human rights in the sub-continent? They have done immense work to expose fake encounters, emergency excesses and hunger deaths. They had also waged legal battles against the draconian laws that appropriated the fundamental rights of the citizens.

This doesn’t mean that civil rights organizations are not committed to any cause and are neutral in an abstract sense.  Of course they are committed to the cause of victims of all kinds of violations. Whenever the state and the ruling class suppress a fact or derail a people’s movement, a civil rights movement will take this issue against all oddities and risks it faces. Protecting the human dignity is the ultimate aim of a HR organization. It should be bold enough to oppose the violation of the human dignity in any form and from whichever direction this violation comes from.

Though a civil rights movement will not behave like a frontal organization to any political party it will strive hard to establish a civil space for all the people’s movements including those which believe in armed struggles.

We are speaking all these things with the sole aim of strengthening the civil rights movements in a time when HR violations are increasing. A dialogue becomes necessary between the various civil rights organizations functioning today. This dialogue should be conducted concurrently with our ongoing struggles against the violations of state agencies.

With this aim we are initiating a dialogue among the civil rights activists functioning in different parts of India. The one day seminar we have arranged will have two sessions. In the morning session activists from various states will share their views and experiences. In the afternoon session representatives from different organizations will air their views followed by an open session.

The possibilities of a coordinated action against the war proclaimed by the Indian state against the tribals will also be discussed. An appeal signed by all those assembled will be released in the evening.