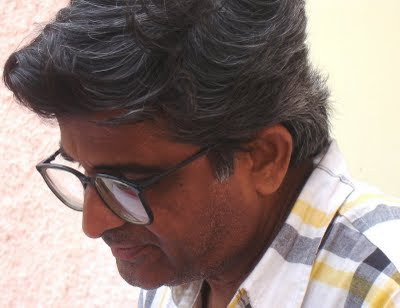 In a short span of two days after his death, it is impossible to come to a comprehensive assessment of his life, three decades of his rights activism and its characteristics.Our attempt here is therefore only tentative. He was the fifth child of Kandala Parthanatha Sarma and Nagamani. Due to his father’s frequent transfers he studied at different places in A.P, from Nellore to Srikakulam. He did his PUC in Kavali and B.Sc in Tirupathi. After completing M.Sc and Ph.D in Mathematics at the Regional Engineering College in Warangal, he joined Indian Statistical Institute at New Delhi for research. Dissatisfied with life there, he came back to Warangal to be with the democratic movements and joined the Andhra Pradesh Civil Liberties Committee. After joining Kakatiya University as a lecturer in Maths, he started taking a much more active role in the rights movement.

He was an exceptionally brilliant student and a recipient of several gold medals. He was also an opening batsman for the cricket team of Venkateswara University. While pursuing Ph.D he became a member of the editorial committee of a renowned international journal of mathematics. His task was to review complex research in mathematics and explain the same to the readers in a simple style.

He was elected to the post of the General Secretary of APCLC in 1983 and carried out that responsibility for 15 years. He took up the leadership of the organization when the repression on the Naxalite movement had just begun. In the process of exposing fake encounters he visited every nook and corner of the state. He expanded the organization from its confined location in a few cities to every small town in the state. Inspired by his activist practice, numerous young people were attracted to the organization. In order to inculcate the consciousness of human rights in muffasil areas he identified issues that are specific to each district and worked through them. By enabling the district activists to articulate the local rights issues, he shaped the organization in such a way that wherever a violation of rights took place, they would raise their voice against it. Even though many civil liberties leaders such as Gopi Rajanna, Dr.Ramanatham, Jaapa Lakshma Reddy and Narra Prabhakar Reddy were killed, he did not lose heart. Instead, he tried to infuse courage among the fellow activists. He remained unfazed in the face of direct repression too. Arrested under TADA, he spent three months in Warangal prison but always believed that it is quite natural for activists to be arrested or imprisoned. His response to attacks on his person exemplified his democratic temperament. When he was attacked by ABVP activists in 1984, kidnapped by the Khammam police in 1989, fatally attacked in Kottagudem in 1992 and even mauled in the presence of National Human Rights Commission in 1993, he refused to pause even for a day. Speaking to the media after he was released by his kidnappers, he suggested that they should focus more on the repression of the rural youth, rather than on him.

Balagopal’s success lay in making the Andhra Pradesh Civil Liberties Committee stand by the people of Andhra Pradesh, especially in opposing the repression unleashed by the state government in the name of containing naxalism. His efforts in developing APCLC into a pioneering organization in opposing state violence in India are unparalleled. Working relentlessly, he sought to extend the civil liberties activism and practice from the confines of urban intellectual debates onto a much broader basis. When Dalits were attacked during the initial years of Telugu Desam regime, his was one of the first democratic voices to be raised. During the anti-Mandal agitation he wrote the first analytical essay in support of reservations for backward castes from a human rights perspective and thereby widened the horizons the human rights movements.

Under Balagopal’s leadership the perspective and practice of human rights movement grew to become interdependent and began to draw strength from each other. He strongly believed that the priorities and perspective of the movement should be reconfigured through practice, while practice needed to move in step with changes in perspective. In this process of reflection he came to recognize that the absence of rights did not arise solely from class dominance but also from other modes of dominance and oppressive practices therein. As all forms of institutionalized dominance impede enjoyment of rights, human rights movement should desist from choosing one kind of violations as its priority, he cautioned. Raising the issue of undemocratic activities of various movements for a critical discussion, he argued that a human rights movement need not support every action that other movements do in the name of struggle.

He thought that there was much that the human rights movement could learn from every democratic movement against different forms of dominance. The task for the human rights movement is to articulate the aspirations and demands of these movements in the language of rights so that they attain universal validity. The agenda that he outlined for human rights movements was: to work for the institutionalization of already recognized rights, to struggle for the recognition of un-recognized ones, and most importantly, to cultivate democratic values and culture in the spheres of law, administration and societal thinking. He envisaged a broad based and autonomous human rights movement which would be accountable to the people. Due to the differences of opinion emerging from such a reflection, he left APCLC to form Human Rights Forum (HRF) with a few comrades. Over the last ten years, HRF’s growth from 32 member organization to an active and energetic 300 member strong organization owes a lot to the untiring efforts of Balagopal. His vision lay in creative alignment of human rights theory with practice and in cultivating among common people a spirit of commitment to social responsibility and faith in democratic values.

After joining the civil liberties movement Balagopal wrote numerous analytical commentaries on various social and political phenomenon in Andhra Pradesh. In the last ten years, all the anonymous essays published in the ten Human Rights Bulletins (Journal of HRF) were authored by him. His book on D.D.Kosambi, introducing Kosambi’s new thinking on historiography to Telugu readership remains till today, a standard textbook for Telugu medium students in History Departments. For intellectuals outside Andhra Pradesh, his essays in Economic and Political Weekly remained the most important source to understand what was happening in the state. Many economists of yesteryears recall with admiration his reviews of Cambridge University publications in economics. His essay on the Chintapalli incident where the police burnt thousands of tribal houses in Visakhapatnam district won the national award for journalism given by PUCL. To conduct public inquiries into human rights violations all over the country, he established Indian People’s Human Rights Commission along with Nandita Haksar and Sebastian. In a sense, it served as the basis for the establishment of the National Human Rights Commission. Balagopal is known to people of Kashmir, Manipur, Chattisgarh, Tamilnadu and Karnataka which saw extensive human rights violations in recent times. He visited these states many times with other civil liberties organizations and brought out several reports.

Despite rising to immense heights in the human rights movement he chose to live a simple and ordinary life. He practiced what he believed in his everyday life. He did not have any life outside the movement. From 1981 till his last breath, he used all his energies in struggles for justice for poor people and protecting their rights. For rural people his name is synonymous with ‘rights’. Intellectuals consider him as a thinker who advocated human rights norms to evaluate the democratic quotient of any social and political phenomenon. He stood out as an intensely committed lawyer in a profession increasingly beset with corruption. He not only provided a moral compass to peoples’ lives but also diligently carried out the responsibility of warning them about impending threats to public interest.

Balagopal was deeply disturbed by the opportunism displayed by the intellectuals in the state after the death of Y.S.Rajasekhar Reddy. His caution to the members of Human Rights Forum on the eve of its third State conference on 2nd and 3rd October would well be heeded by these intellectuals too, “This (Human Rights Forum) is a new experiment in the history of peoples’ movements in our state. If we do not sustain it, it is not only a defeat for us but also a blow to the democratic belief that ideals can bring people together. If we sustain it and take it forward successfully, we would have strengthened the spirit of democracy itself”.

Explaining the philosophy of Narendranath, his long standing friend in the human rights movement, who passed away in July this year, Balagopal said, “As long as people are suffering, one cannot rest in peace”. These words describe Balagopal’s philosophy of life too.