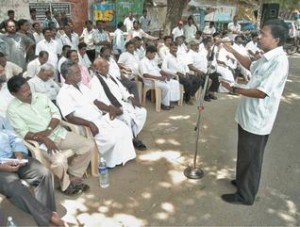 Puducherry: Several organisations got together to stage a demonstration at the Sudesi Mills grounds on Wednesday against the death penalty.

Finally the protestor demanded that the death penalty be abolished in India, following the example of the other 139 countries that had forbidden the death sentence.

The protest was organised by the Federation for Peoples Rights and a total of 23 organisations participated.