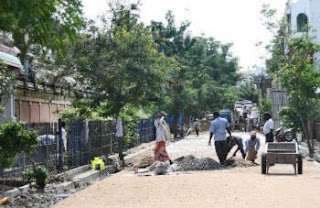 In controversy: Road-laying works under way on Muthumariamman Koil Street in Puducherry on Thursday.

PUDUCHERRY: The road-laying works on Muthumariamman Koil Street, adjacent to the Vedapurishwarar Temple on Mahatma Gandhi Road, have kicked up a series of controversies.

Civil society organisations have demanded the immediate stoppage of work, alleging that it is in violation of the town grading plan. They allege the newly laid concrete road is a foot above the floor level of the temple courtyard and would make it impossible for rainwater to drain out. They further said that prolonged stagnation of water would weaken the foundations of the temple.

A representation was made to the Chief Secretary by the organisations on Thursday, requesting his direction to rework the plan and stop the ongoing works.

The road-laying works have been taken up by the Puducherry Municipality with the help of MLA constituency development funds. The proposal and tenders were issued last year and the works began in June.

According to a senior municipality official, the stormwater drains in the temple have been designed in such a way that most of the rainwater flows into the temple tank. The remaining water that used to stagnate would usually be pumped out into Muthumariamman Koil Street from where it would run through M.G. Road and connect to the canal near the Ajanta Theatre.

After the NGOs raised the issue with the administration, a separate ‘hot-line’ to drain out the rainwater from the temple and connect it to M.G. Road was laid, the official said. The temple courtyard had traditionally been below the road level and it was after the request of the residents, who complained of water stagnation on the streets, that the new road was laid.

But, according to G. Sugumaran, member of Alliance for Good Governance, an umbrella organisation of various civil society groups, the drains to which the hot-line connects are also at a higher level and if there was stagnation on M.G. Road, the water would run back through the pipes and flood the courtyard. He said that when the Joint Engineer of the municipality was asked to assure that such flooding would not happen, he refused.

Mr. Sugumaran also said that when this issue was taken up with the Chief Town Planner, they were told that it was too late to amend the plan and the NGOs should have brought the issue to their notice earlier.

Terming the allegations “bizarre,” Member of the Legislative Assembly from the Cassicade constituency K. Lakshmi Narayanan said the residents of the area have not raised any apprehensions about the road-laying works and all norms have been followed in the process of laying the roads.

The executive officer of the temple, Dananjayan, told The Hindu that there was no water-logging inside the temple and extra precautions have been taken after the NGOs brought the issue to their notice.